Visceral Fat is not Subcutaneous Fat 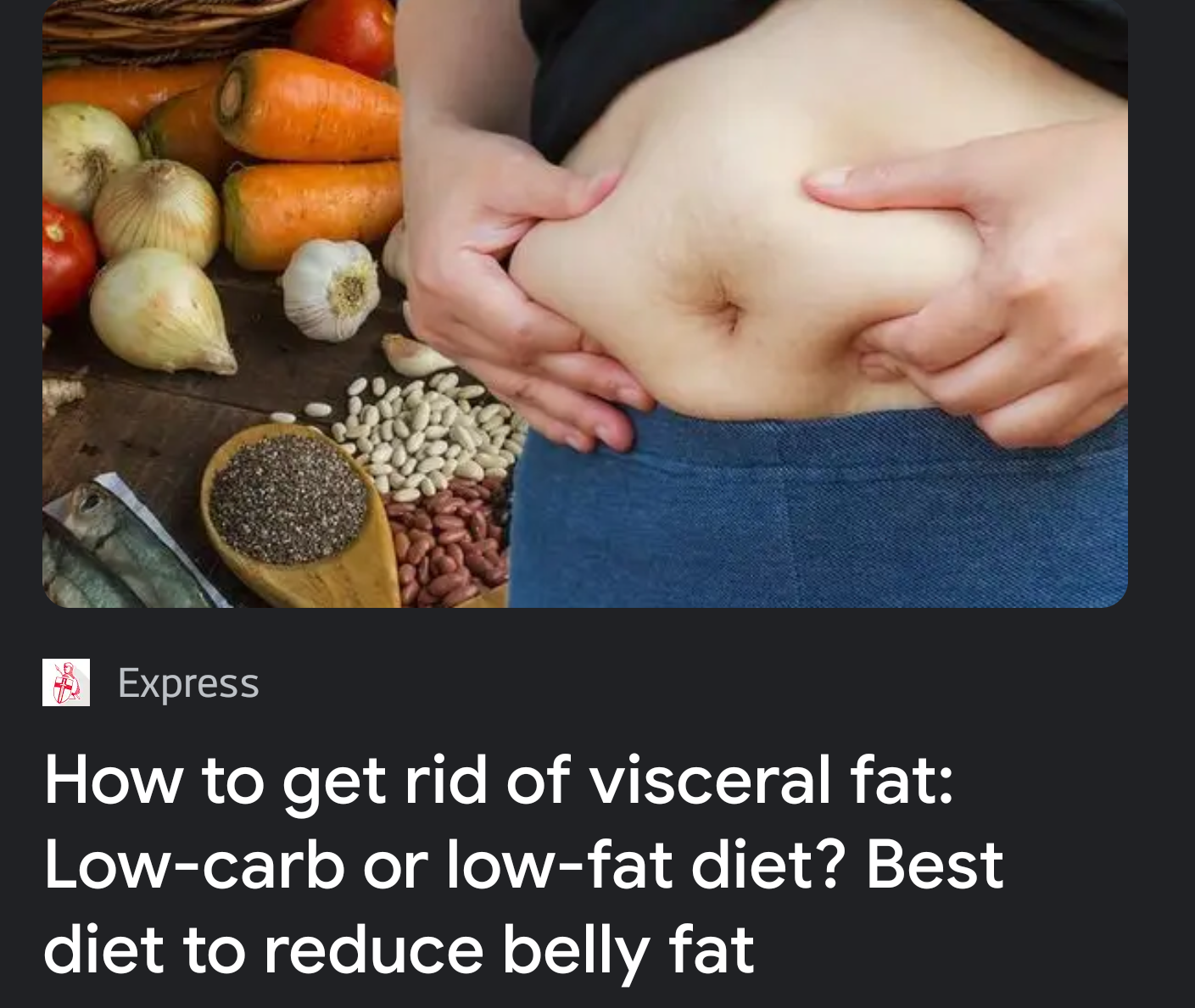 Hmm... No. Both the photo and title are misleading. Visceral fat isn't the same as subcutaneous fat, which while not pretty, is relatively harmless provided it isn't excessive. Visceral fat on the other hand is fairly dangerous as it surrounds your organs and is a sign of metabolic disease and insulin resistance. The reseason visceral fat may be so dangerous vs subcutaneous fat is a regulartory molecule called TRIP-Br2. TRIP-Br2 is not found in subcutaneous adipose tissue. Oddly enough, TRIP-Br2 appears to block or prevent normal lipolysis. So, if you have lots of visceral fat, you might not be able to lose weight normally. This may explain why many people struggle with the viscous cycle of failure. Insulin resistance, inability to lose fat, and so on, are all tied together. This may also be why diets like keto (insignificant carb), carnivore (0 carb), low carb (<20% of your calories from quality carbs) work for people when the standard diets don't, even though many in the nutritional community still claim its simply a matter of CICO (Calories in, Calories out). CICO definitely plays a role, but hormones and other factors also play a role. The human body is much more complex than a simple thermodynamics equation.

Popular posts from this blog

April 13, 2020
Orange juice -which is associated with type 2 diabetes- is definitely not what you want to be drinking to ward off Covid-19. In NY State the number two comorbidity in Covid-19 mortality is diabetes. While orange juice might be a reasonable source of vitamin C, you are far better off eating spinach, broccoli, kale, sweet potato, tomato, or peppers. Basically there are many healthier options. If you doubt OJ is bad for you, you can always check your blood glucose after drinking it and see for yourself. NYS DOH COVID-19 WORKBOOK  I've also included a link to a British medical journal large cohort study that looks at this particular issue. Keeping in mind that the study actually found that most whole fruit consumption was only weakly inversely associated with type 2 diabetes (blueberries being somewhat of an exception), yet there was still a higher risk of diabetes in juice drinkers. Basically, fruit is likely not protective against type 2 diabetes (which makes
1 comment
Read more

April 11, 2021
"Low testosterone levels are linked to a higher risk of heart disease, diabetes, and Alzheimer's disease." While I wouldn't call 40% fat high (since the maximum upper limit of human protein intake is <40%, hence how wolves became domesticated and how lean meat "rabbit starvation" occurs¹,²). Really this study is based on a 40/30/30ish inverted zone diet.  Increased saturated fats (followed by mono), decreased polyunsaturated (Omega-6) fats (seed oils, especially oxidized fried foods), omnivorous diet, decreased carbs are all beneficial to male (and female) hormones (including insulin/glucagon and sex hormones) and thus weight and athletic performance.  Stuff like this really starts to delve into how multifactorial neuro-cardio-metabolic disease is, weighing the pros and cons of chasing one set of metrics at the expense of all others.  Medical Xpress: Low fat diets decrease testosterone levels in men. https://medicalxpress.com/news/2021-04-fat-
1 comment
Read more

April 14, 2020
I've seen about the internet, people in various diet tribes pushing specific diets and supplements to prevent Covid-19 from getting you. The fact is no diet, supplement or nutrient will (likely) save you. But the fact is those most at risk are people who made a lifetime of bad dietary and lifestyle choices. Metabolic disease (obesity, visceral fat, and diabetes), CVD, hypertension, and smoking are all underlying health/lifestyle problems or comorbidities that increase mortality if you become infected with SARS-COV-2. While there may not be anything that you can do in the near term to flatten the curve via diet and lifestyle, long term you can help reduce you exposure to diseases like this by making mindful choices. Reducing junk carbohydrates and junk fats, eating real nutrient dense food and learning to cook for yourself are all great ways to make yourself healthier and more resistant to disease. Both metabolic and infectious. CNN.com
Post a Comment
Read more